The sound of a high performance Dino Ferrari 246GT - click on the start button to listen. 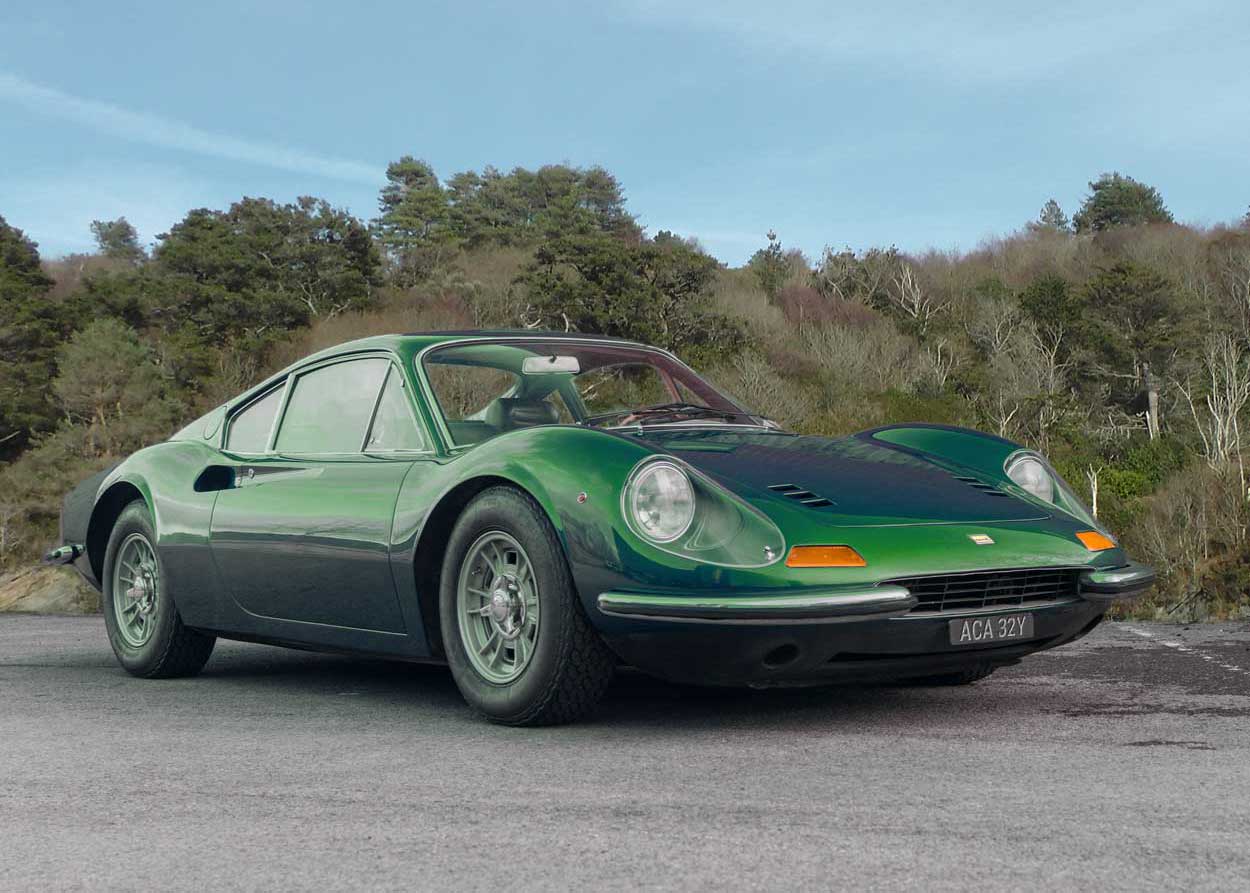 Was the Dino 246 GT really a Ferrari? Enzo Ferrari himself didn't seem to think so.

A typical Ferrari at the time was a luxurious beast with a 12 cylinder engine. The Dino brand came about when Ettore's son Alfredo, nicknamed Dino, told his father about his dreams to create racing cars with V-6 and V-8 engines. Ettore felt that this would dilute the brand; after all which self-respecting multimillionaire would wish to deal with a company that produced cars with such tiny engines? So, a new company was launched in 1957 and these cars were to be called Dinos (after Alfredo/Dino himself, who had died the previous year) even though everyone knew that they were made by Ferrari. That is the price of a rich man's ego. Despite his attempts everyone knew it as the Ferrari Dino.

This was the company's first mid-engined car designed for the road rather than the track. Building it was something that had taken a great deal of thought. Having the engine behind the seats of a car can create problems in the hands of inexperienced drivers because the weight of the engine can cause the car to spin if taken into a corner too fast or under the wrong conditions. Racing drivers of course would be well aware of this and would take the necessary precautions to avoid problems of that nature but the concern was that a record of high-speed accidents could cause a backlash by motorists and perhaps this is one of the reasons why the first mid-engined car was brought out under the Dino label rather than Ferrari.

The brochure for it did in fact describe it as 'almost a Ferrari'; a back-handed compliment if ever there was one. Perhaps they thought they were kidding everyone.

In the event the feared list of accidents did not occur, possibly because the type of person that bought a Dino was more experienced, or careful, than the average.

Dino himself had a hand in designing the 2400 cc six cylinder engine for this car, which created 197 brake horsepower, taking the car up to a maximum speed of 146 mph with acceleration of nought to 60 in 7.1 seconds. These figures are not terribly impressive by Ferrari racing car standards but perfectly adequate for a road car, particularly one as attractive looking as the 246 GT, which was widely viewed as one of the most gorgeous creations of the era. It drove well, too.

Considered to be a suitable rival for the Porsche 911 it was a relatively inexpensive car and the first one created by Ferrari (even though it did not carry their name) which sold in considerable numbers. Sadly Dino, who suffered from muscular dystrophy, never saw it made. He was in hospital during the planning stages of the car and discussed technical details with Vittorio Dano the Ferrari chief engineer; but he died, aged just 24, in June of 1956.