Listen to the sound of a racing Riley Brooklands. Click on the start button to listen. 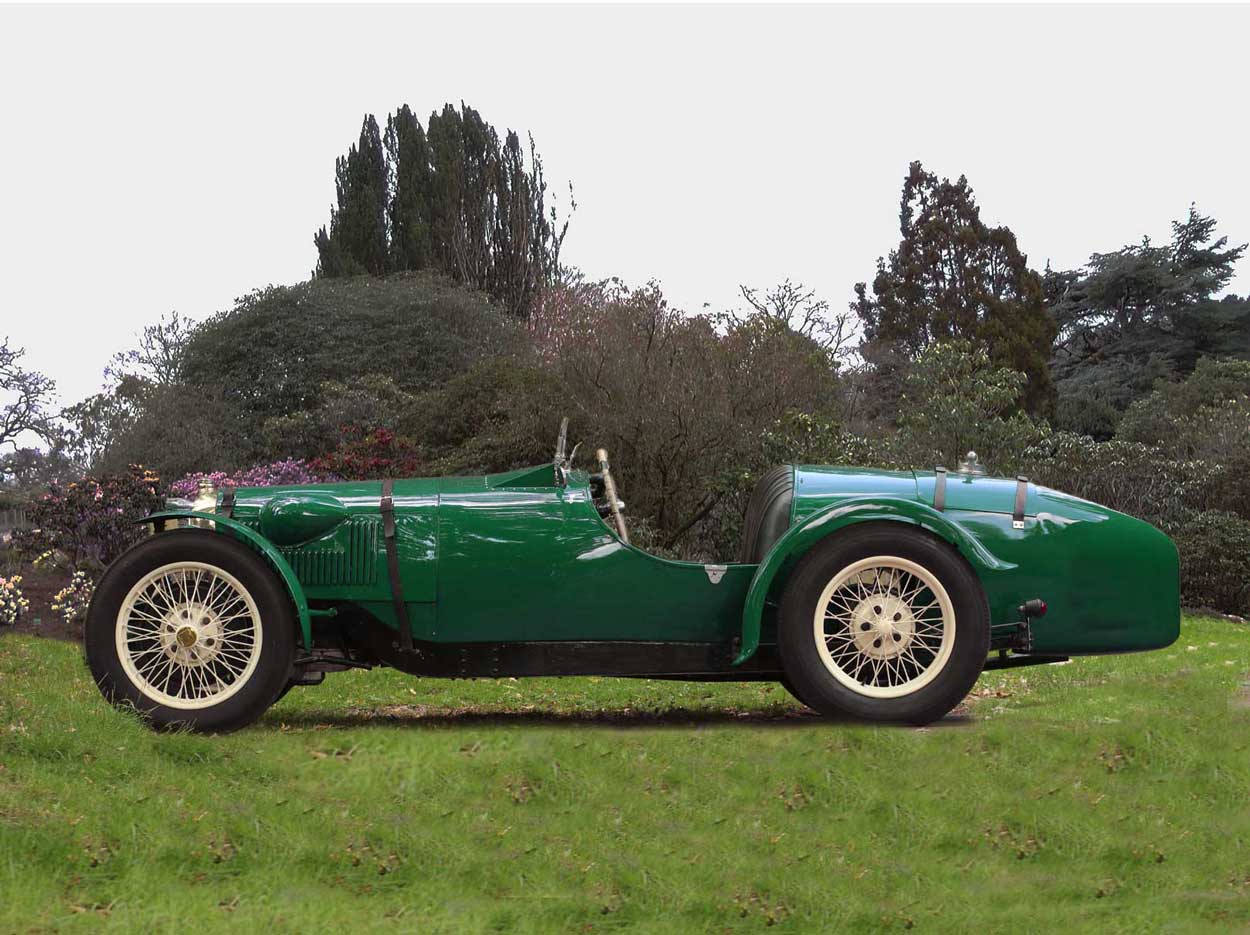 Percy Riley was not a man to accept the conventional wisdom of the day. Back in the 1920s everyone knew that the way to produce a faster car was to give it a bigger engine; but this meant extra weight, and the stronger (and heavier) chassis to carry it. Riley went to the other extreme and designed a lightweight engine and a lightweight car. The result was not only excellent performance for the day, but also good fuel economy.

This engine, introduced in 1926 and called the Riley 9, was not an improvement on an older engine but a complete redesign. One of the main features was a hemispherical combustion chamber. The advantage of this was that the surface area of the chamber is smaller than that of a conventional flat topped chamber. This means that less heat escaped during combustion of the fuel, and this in turn led to more efficient burning of the fuel, because hot fuel burns better!

Another innovation was to set the inlet and exhaust valves with steep angles so that they were virtually at right angles to each other; this not only allowed larger valves but also meant that getting the fuel in the chamber, and exhaust gases out, was more efficient.

This was not completely new idea; many motorcycle engines had what were called 'hemi' combustion chambers as well as the odd car but these were expensive to produce. Riley was the first one to introduce this system on a fairly inexpensive engine.

Another innovation was the way in which the valves were opened and closed by means of twin cam shafts. The more modern way was to use overhead camshafts but this was technically difficult to build and added a lot of expense. Riley set the camshafts high up in the block and then the valves were operated by short pushrods. This gave many of the advantages of overhead camshafts but without the expense, and with a simpler (and easier to maintain) design. Pistons were of aluminium alloy for lightness. The result was a highly efficient engine at a very reasonable price.

Versions of the Riley nine car were launched in 1926 with two body styles initially; a saloon and a tourer. Both of these had fabric covered bodies to keep weight down, and other body styles were introduced soon afterwards, as well as optional steel panelling for the bodywork to replace the fabric.

Power output at the time from the 1100 cc four-cylinder engine was around 35 brake horsepower and a saloon was capable of a top speed of about 60 mph. However the engine was highly tunable, as many amateur racing drivers soon discovered!

By 1928 Pursey's brother, Stanley, created a bodywork suitable for racing, and the engine was tuned by adding high compression pistons, twin carburettors and different camshafts. Stanley himself was not terribly interested in racing however and it was left to others to develop the car further; and the main one was a gentleman named Godfrey Parry – Thomas who, together with his friend Reid Railton, had already made a start on what became known as the Riley Brooklands.

Both these gentlemen were racing drivers and engineers. Parry – Thomas owned an engineering business actually within the Brooklands racing circuit and he and Railton started work on converting a standard Riley nine for the race track. Sadly he was killed on 3 March 1927 whilst attempting to recover his own land speed record that had been broken earlier by Malcolm Campbell. He crashed the car and suffered fatal head injuries.

Railton continued with the project, further tuning the engine to produce what was then a huge 50 brake horsepower, lightening the body and lowering it to within about 6 inches of the ground; so low that a driver could reach out and touch the ground easily. This gave it greater stability at speed and better cornering; it also gave the driver an extremely exhilarating ride.

The first outing for the Brooklands Riley was a 6.5 mile race at Brooklands itself, that Railton won by an amazing margin of approximately 1 mile!

Different engine sizes were introduced so that the cars could compete in other races and it was usually successful, whether driven by the official Riley works team or private enthusiasts. A number of Class G world records were smashed; there was a class win in the RAC tourist Trophy; first position in the 1932 Ulster tourist Trophy; and at Le Mans in 1934 Rileys came in second, third, fifth, sixth and twelth!

The Riley Nine engine was still in production right until 1938 when the Nuffield Organisation, controlled by William Morris, bought the company. Because he had a policy of making no more than two engines at any one time production of the Riley 9 engine came to an end.